Seattle, Sept. 23, 2020 — Kyle Sciuchetti was sworn in as President of the Washington State Bar Association (WSBA). Washington Supreme Court Chief Justice Debra Stephens administered the oath of office virtually during the WSBA Board of Governors meeting on Sept. 18. 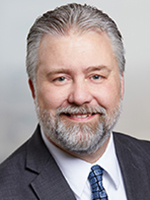 “I like to think of myself as a ‘bridge builder’ and consensus driver in order to get things done,” said Sciuchetti. “As a lifelong Pacific Northwesterner, I have established lasting relationships with clients and colleagues all over Washington and our sister states of Oregon and Idaho. We have much in common with our bordering states and we have an opportunity to work with each other to improve legal services and access to justice for all of us.”

As WSBA President, Sciuchetti will oversee the long-range, strategic planning process for the future of the WSBA, which began this year. He will also be the first president from Vancouver since the WSBA was formed in 1888.

Sciuchetti got a taste for the law as an undergraduate working at the University of Washington School of Law Gallagher Law Library, where he would read used hornbooks that were discarded at the end of the year. He is now a partner of Miller Nash Graham & Dunn LLP, serving as outside counsel for businesses throughout the Pacific Northwest. With more than 20 years of experience, Sciuchetti focuses his practice on construction law and business litigation, as well as dispute resolution, lien foreclosures, and contract and lease negotiations in Washington, Oregon, and Idaho. Prior to private practice, he served as the senior in-house counsel for the Public Power Council, assistant city attorney/prosecutor for the City of Spokane, and drafted legislation for the Washington State Legislature.

Sciuchetti served 14 years on the WSBA Legislative Committee, including as its chair for several years and is a past chair of the Board of Directors for the Clark County Food Bank. He also serves on the Board of Directors for the Humane Society for Southwest Washington. Born and raised in Spokane, Sciuchetti graduated from John R. Rogers High School and received his undergraduate degrees in political science and psychology from the University of Washington and his law degree from Lewis & Clark Law School. He currently resides in Vancouver, serving legal needs and communities of Southwest Washington.

Sciuchetti’s term as president of the Bar runs through September 2021.