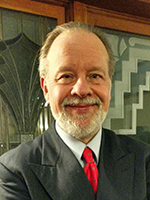 Following his swearing in, he thanked his friends and family who had joined virtually and in-person for the event. He especially thanked his wife, Linda, for her support and assistance throughout their marriage.

“It’s been a wonderful experience and I’m looking forward to the opportunity and challenge,” he said of his time on the Board of Governors and new position as WSBA President. “The State Bar’s many members have career and life priorities. Finding common ground for the benefit of all our members and the public will be the focus of my time as president.”

As WSBA President, he will oversee the long-range, strategic planning process for the future of the WSBA.  His term as president of the Bar runs through September 2022.

He was first elected to the Board of Governors in 2017 and elected by the Board of Governors as president-elect in 2020. He is currently a principal at Black Robe Dispute Resolution Services, PLLC, having previously served on the Pierce County Superior Court bench for over 27 years. Before his judicial career, he was a partner in a Tacoma law firm. He is an emeritus member of the Robert J. Bryan American Inns of Court and has also worked with the National Courts & Sciences Institute.

The WSBA operates under the delegated authority of the Washington Supreme Court and exercises a governmental function authorized by the Court to license and regulate the state’s nearly 40,000 legal professionals, including lawyers, limited practice officers, and limited license legal technicians. The WSBA both regulates legal professionals under the authority of the Court and serves its members as a professional association — all without public funding. The WSBA administers the Bar admission process, including the bar exam; provides record-keeping and licensing functions; administers the lawyer discipline system; and provides continuing legal education for legal professionals, in addition to numerous other educational and member-service activities. The Bar’s mission is to serve the public and its members, to ensure the integrity of the legal profession, and to champion justice.